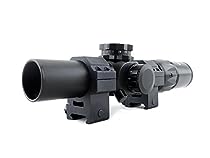 Good solid scope, good optical quality and consistent zero, nice features.
By _____
First Impressions:
I picked up this scope as a realistic option for a 16" AR15. Overall I'm very happy with it. It offers a great balance of features at a price that is hard to beat. The scope is very solidly built and I like the 30mm tube, although it does add some extra weight. The optical clarity is good, and very good considering the price point. Much higher priced scopes will offer better glass, but given the magnification range, it's totally acceptable. I didn't notice any washout of clarity around the edges when zoomed into 6x, which was great.

Features:
This scope offers a true 1x up to a 6x magnification level. It has an adjustable eyepiece to accommodate for various eyeballs. If you're shooting at the far end of the 5.56's realistic capability, i.e. 500+ yards, you will probably want something with more magnification. However, for most CARBINE shooters, this will be an awesome option. It's worthwhile to mention that at 1x with the illuminated reticle on, (Red or Green, NICE!) you have essentially a red-dot like view. The exit pupil is generous, and the resulting eyebox was right where you expect it. No issues there.

Being a first focal plane scope, the reticle will be quite small when the scope is on 1x and when you zoom in to higher levels, your reticle increases at the same rate as your target. When on 6x, the crosshairs are a little chunky in appearance, and appear to be about 1/2 inch thick on a target at 100 yards. Again, for a carbine, it works fine.

Holding a zero, tracking, and turrets:

I mounted it on a SWFA mount, and haven't tried the included 30mm rings. They seem fine too, though.
First shots were on paper right out of the box. A good sign! One of the biggest common downfalls of lower end optics is that the tracking consistency is poor and a scope just won't hold a decent zero. Not the case here! Sighting it in, I was getting typical sized groups from wolf ammo at 50 yards, about 2 MOA. I switched to some Lake City ammo and the groups dropped to about 1 MOA. The tracking seems to be accurate and consistent. Each click is 1/2 MOA, I got a decent zeroed and moved out to 100 yards to fine tune.

At 100 yards, a few more groups of LC ammo were punching in around 1 to 1.5 MOA, Last I tried the American Eagle Tipped Varmint 50gn ammo, which has been a good performer for me before. Sure enough, on 6x I was getting sub-MOA groups with this scope. Best was probably 0.6 MOA for a 3 shot group. This optic really offers excellent performance for a relatively compact optic. I had NO ISSUES WITH WANDERING ZERO. A+ on the internals holding up.

The turrets on this scope offer a great zero-reset feature. The turret clicks are not as tactile as I would like, however they also have another ring under each turret that allows you to tighten the tension against the turret, either locking it in place or making it harder to slip. Once they are tightened, they won't move easily, which is good. A quarter is required to loosen and remove the turrets to zero them, which works ok and makes for a cleaner look. Overall the turret design is good, but if you are planning on dialing your elevation for long range shots you will probably find the locking rings to be cumbersome. If you zero the scope at 100 yards and use the reticle for elevation hold-off (as intended) you shouldn't have any problems.

I haven't owned the scope long enough to comment on battery life. So far, so good. The illuminated reticle is good for low light conditions but barely visible during the day. Black reticle is etched on and always good!

Pictured below is how the reticle appears at 6x, looking at some targets at 50 yards. Group shown shot at 50 yards, about 0.8 MOA.

Overall this scope rocks and I'd buy it again. It's just what I was looking for with the AR.

It works
By Cliff
Decided first scope prolly but it was tough to adjust the magnification feature. Almost impossible. Contacted Monstrum and they quickly replaced it with a replacement new scope. This one works fine. Waiting for warm weather but appears to be a good value with nice features. So far nice scope, great customer service. Best customer service I can think of.